There was only 2×4’s holding up the roof and we wanted to eliminate the knee walls.  The first thing was to create a ridge beam to better support the rafters we planned on adding.  We hired two contractors to put in two 2×12 LVL’s (Laminated veneered lumber) held up by a 4×4 douglas fir in the middle that was supported  down to the basement floor. 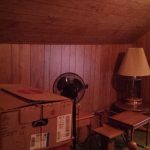 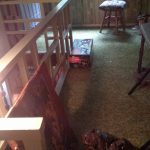 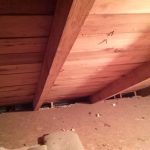 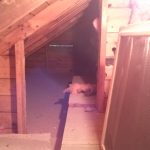 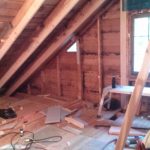 knee wall is out 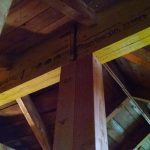 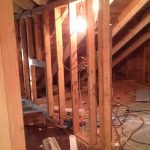 This wall’s coming out 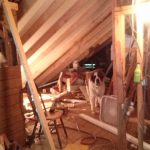 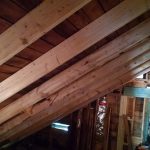 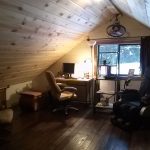 Two by eights were then put in with a framing nailer and a 6 ton automotive bottle jack.

Steve would brace a “T” shaped wood invention to the rafter and bottle jack that had a large piece of LVL lumber under it to spread the area of impact.  He then jacked up the roof one rafter at a time to fit a two by eight that was cut to fit the upper and lower roof angle.

We are planning a  “michigan roof” as its called around here in Wisconsin (?).  It’s a hot roof or sealed insulation in the rafter cavity with no traditional air gap.  When the metal roof is installed we’ll put in an air gap  between it and the old roof outside the house.  Inside,  layer of 2″ hard insulation is against the roof, then there is still enough space for R21 fiberglass insulation to total between R26-28.  We put a layer of Reflectix for a vapor barrier that was supposed to increase the R value, but I am still skeptical about that.  We plan on car siding or tongue and groove pine as the ceiling.  As we got more 2×8’s put in we were able to take out temporary braces that were put in.  This allowed us to take out the knee walls that held up the roof before, now to create more living space.

This is a widget ready area. Add some and they will appear here.