In the rush of getting everything finished in the cabin, we neglected to seal the pine carsiding or tongue and groove ceilings.  It’s been a year for many of the ceilings now and they have darkened to a harsh yellow and orange that is not so pretty.  I watched a u tube video of a danish way of pickling or whitewashing pine so that it stays new looking and it brings out the grain in the wood.  I’m not sure if these 2 photos can show you the difference: 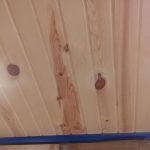 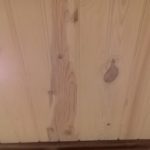 In person, I notice a big difference.  The right side looks finished and has a softer appearance without being milky.  I use  not much Minwax pickling stain with a brush and actually spread it out thinly by scrubbing the brush into the wood without adding more unless I have to.  Sometimes I wipe off a little if it still looks milky.  Then I put on a clear matte water-based polyurethane by Varathane. 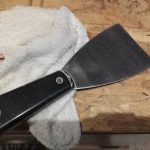 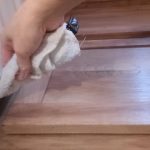 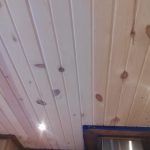 The above picture shows the before and after a little better.  I tape all the edges, but there is always some bleeding.  I wrap a putty knife in a damp rag, the thinner the better, like a t-shirt.  Then I run the putty knife in a backward motion only to take off the bleeding.  It will work for up to a week or so before with paint but stain should be cleaned up right away. It tends to cure faster.

This is a widget ready area. Add some and they will appear here.